Blairgowrie and Rattray Bowling Club was formed in 1868 with Mr G R Ballingall elected to be its first President.

On 16th June 1920 a meeting took place in Rattray Public School when a proposal was made to form a bowling club in Rattray. A further meeting was held on 19th July 1920 where an executive committee was set up to take action and raise money to purchase a site to make and build a green and clubhouse. The proposed new green was completed and ready for play by June 1922 and the official opening took place on 1st June 1922.

Blairgowrie Bowling Club continued and in the 1948/49 season permission was granted to the ladies to form their own section and nominate their own Lady President who was namely Mrs Aitkenhead and the first Lady Champion in 1950 was Mrs Herraghty.

As the membership increased it was realized that a larger clubhouse was needed and a new bar was made.

In 1967 the ground where the tennis court and croquet lawn had been, was sold, the club keeping a third of the ground to allow any future extension to be built, the other two thirds is now where the two houses are built on either side of the clubhouse. The first part of the new extension was built downstairs and named the Murray Lounge after William Murray who had been one of the longest serving members of the club, the lounge was officially opened on April 21st 1981 by James Bowman President of the Scottish Bowling Association.

A new greenkeeper’s shed was also built on the opposite side of the green from the clubhouse to replace the wooden one.

In 1988 it was decided to extend the clubrooms still further and the upper part of the club was extended to make a larger bar area, ladies and gents toilets, and new ladies and gents locker rooms. This new lounge was completed and officially opened on 18th February 1989 by Mr Fortune Visocchi and Sir William MacPherson of Cluny who has been the club’s Honorary President for many years.

The new gents toilet on the immediate left at the foot of the stairs was completed and ready for use in the summer of 1998. 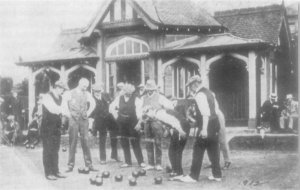 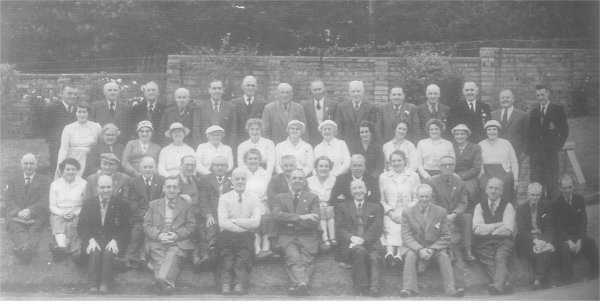 Members of 1959
We use cookies to ensure that we give you the best experience on our website. If you continue to use this site we will assume that you are happy with it.Ok